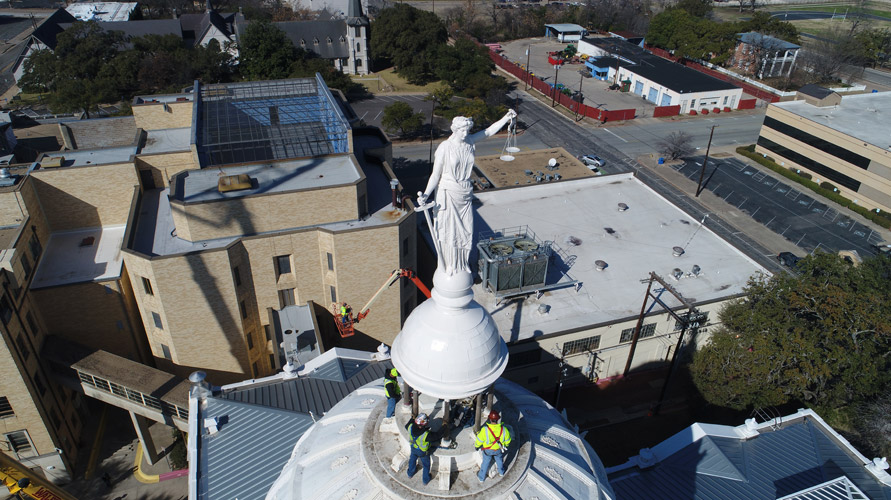 Montgomery Construction & Roofing was awarded the project to remove the existing Themis statue on top of McLennan County Courthouse, duplicate the statue (which was made of zinc metals) and fabricate a new indentical cast aluminum statue. Montgomery then installed the new statue atop the McLennan County Courthouse amidst a Saturday morning crowd of media, interested spectators, and farmer’s market shoppers, curing what was “hoped” to be a calmer day with regard to high winds that had prevailed through the 2017 Christmas holiday season.

The statue of Themis was originally placed atop the courthouse in 1902 and had only been removed from her perch of the McLennan County Courthouse one other time. Seven years prior to being granted duplication, Themis was removed for repairs and restoration after it was discovered the sword had fallen off and the arm that holds the Scales of Justice was ripped off after an intense storm. The original Themis was repaired and placed back atop McLennan County Courthouse. Little did the county official know that 5 years later another storm would rip off the same arm. After 115 years, McLennan County officials said Themis had earned her retirement. A storm carrying 65 mph straight line wind gusts ripped the left arm from the 18-foot-tall Goddess of Justice in mid-2014. Due to the fragility of the original zinc statue, county commissioners agreed to have the statue replicated instead of trying to replace her left arm and Scales of Justice.

The original statue was made of zinc.  It was thicker than that of a soda can, but very fragile, and there was visible damage from over a century of hail storms.  The Themis that left Waco weighed about 700 pounds, and that included repair and fiberglass added to the true original.  The cast aluminum replacement weighs 1,700 pounds, over a half ton heavier. Upon inspection, Montgomery discovered that the new Themis statue was an EXACT replica even down to the hail hits on the original statue. After approval of the new statue, she was then transported back to Montgomery’s office to be attached to the original dome.